Expressa 2 - Bus Upgrade Plan
I'd recommend you don't click this before reading the previous post Expressa, or this will be propaganda material no different to East Germany.
Upload postscript: If I do another long post like this I will commit seppuku.
Read more »
at 02:50 No comments:

We have 4 express routes; 607; X26; X68; X140 as well as express sections on normal routes; 96; 132; A10. It's a far cry from London's peak.
How many do other European cities have?
Pro tip: Hong Kong is the boss, funny, as that's a pre-British controlled metropolitan area.
Better the Network: Express Routes.
Here we go.
Note: Usage of any photos on this blog isn't permitted where no name is present (meaning it's mine, ©Unorm), or an All Rights Reserved symbol © is present. If you desire to use a photo, you must contact the original author. In my case, you should contact my Flickr.
Whereby a name is stated and no © is present, the photo is Some Rights Reserved and may be used in accordance to the license.
...
Read more »
at 23:56 No comments:

I've decided, 'before Transport for London make it, following the Croydon one, I'll save myself from the despair of waiting it and fantasize my own delusions.' This is the very delusion. The delusion I've spent my entire damn March on drawing maps alone.
I should preface that some of the areas would fall under other borough's jurisdictions but the routes enter one of these two boroughs.
The beginning of a new world.
Warning: This is very long.
Also yes this was uploaded on April Fools but I assure you it's not one, I just worked my entire March on this is all...

The night tube bus routes ending was a shame as they brought more to the table than simply interchanging with a station of a Night Tube. For example Clapham Junction's nightlife effecting the 319 and Sutton's cries and woes for the loss of N213 into Croydon brought back in the form of the 154.
Can they be bettered?
Short answer: Yes
Long answer: Yes for the most part with some No's so read below as to how it could be made more useful than simply connecting to a Night Tube whose service has been suspended during the pandemic. Though truly that depends on if it's possible as everything can't be done under the same blanket thought because that failed with the likes of having double decks one size as if one shoe fits all which it doesn't and this is just filling in space so you just click 'read more' so just do that whilst I explain how I dislike random holes in an otherwise perfectly plain and simply done job since it's really just OCD, the same applies here because one logic applies to A but another logic for some reason applies to B and you have just express routes mainly down to decisions before TfL's existence and/or woes by Harrow and the need to save the quids.
Bold title I'll take the mantle of moving forward...
Read more »
at 13:59 No comments: 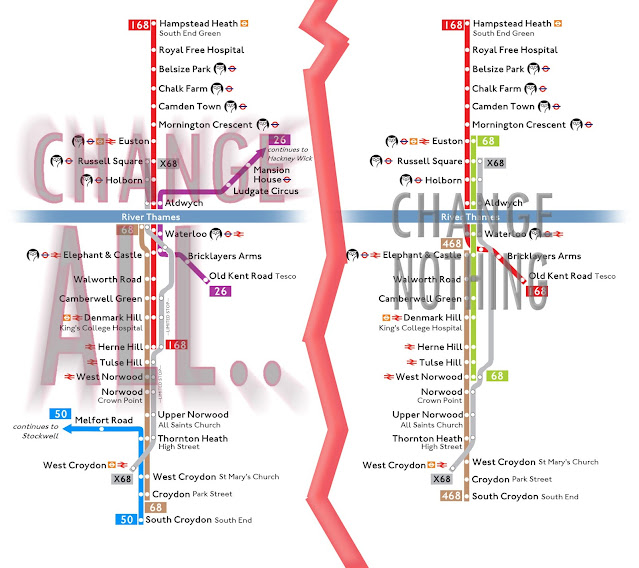 Might or might not have touched on it but internally I dare say I struggle now that the topic is revived with the 4% mileage cut TfL propose in the next 3-4 years to cut down expenditures, no blaming in that aspect. Good thing it slowly died out of minds the moment I finish this post up, eh?
So with my pride swallowed, I try to investigate the variety of ways this can be executed. With the opening statement being 68's split (with 68A [468]'s birth) intended to be at Herne Hill rather than West Norwood. Fun facts eh, too bad 40 decided to outright leave for Dulwich.
I'm questioning why I've done this but I've put the effort in anyways so I've seen it through to the end.
Read more »
at 02:38 No comments:

The new decade. Let's get this over and done with.
October Postscript: Initially typing the above I was bored to type more but less said the better.

The original 2-series single decks, are they still single deck? Exactly how many single deck routes can be double decked? Is it an efficient use of resources to do so? This title is pretty long isn't it? I've taken inspiration from light novels.

Even if you aren't well versed in the numbering system you would've noticed how majority of routes in Central London are numbered below 100, with the predecessor being a short mutation of current 366 between Jenkins Lane and Barking, but via Gascoigne Road.

Either way, I explore, mind you with calculations that are invalid from the start due to different conditions (i.e not fair tests), to come up with the answer to questions on the line of: "Is it cost-effective to convert single deck routes to double deck?" With the mindset of "if it can take them [double decks], convert them." For now though...

The art of aiding 109. The barren of killing 45. The culmination of night.

So it's pretty normal to have ideas to help improve the transport network, whether it be extra vehicles, joining links that aren't there, or perhaps slimming down routes that could be losing money. In practice everyone has their own extremes and minimalism to this practice, and some can feasibly work whilst some could need a revision at best.

I can only speak for what I'm local to, and after saying what I've just said I'd be a hypocrite to mention something outside my boundary. Example: Extend 258 over the 395 there wasn't a need for a brand new route to replace 398's Greenford section. Now that I've branded myself as a hypocrite, that's an idea I've harvested from someone else.

Unlike the me of the past, where I'd have ideas for a lot of things, I've succumbed to accepting what I have dear, and gripping my knife in cold blood whenever I receive news of a downgrade in my area. A la 468 frequency cut and 250 cut to West Croydon.

Many of my ideas can be viewed on my Flickr photostreams, my main (through this album) and my newer photostream because I'm a cheapskate. As well as that, my coined 433 idea is one of the first blog posts I've made. I won't link them, if you want to read them you search them... baka.

So now this epilogue of fooling you into only one photo in my main's album since I deleted a lot of stuff and giving you the option of my reviewing my wildest dreams I present you another one, though I'll add as much nuance as I can and give explanations where possible. Disclaimer: I'll add some ideas I've curated on my own. Oh the shock. Jokes aside:

The new decade. Let's get this over and done with. HT10 (SK20BGZ), West Norwood Station October Postscript: Initially typing the above ... 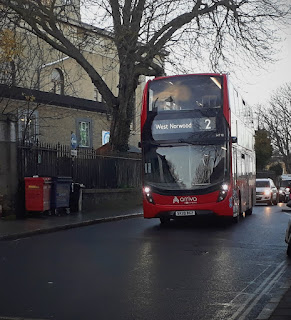