It's been seven years of Stockwell (SW) on both routes, the 432 having for the first time left Norwood (N) since it split from route 2. Whereas 322 makes it's return to the depot, for the first time as a high frequency route with it's contractual frequency increase back to pre-2005 levels before Stockwell (SW) had the route for their 2005-2010 reign.
I'll be giving my armchair report as a local, whilst giving in some factual data from TfL's performance data sheets to back up some of what I say, but cannot be used to translate one experience to the numbers TfL provided.
It's the 2015-2022 time I will no doubt focus on, the first time 322 ever had a 2 year contract extension, the same could be said for 432 though is not impressive given how relatively trouble-free the route has been compared to it's angsty ancestor in a little body.
Briefly, for context. Before 2015...
Route 432
Norwood (N) on route 432 has been stellar, given they held the route since birth in 2003, and conceptually as part of route 2 (overlapping shorts from Brixton to Crystal Palace) since several decades before then as route 2B, even before privatisation.
Common turns: Crystal Palace (southbound) & Tulse Hill Station (northbound).
You'd never see a 432 turned to West Norwood from Brixton, and very rarely see one turned from Anerley. Despite 432 having Norwood (N) central to it, the only respite to be had was driver changeovers, and not being chucked off there. That's not to say it didn't ever happen, but forgettable if it ever happened as it was never frequent.
Running numbers N151+.
Route 322
This mess. Before writing this post, I've delved into rants whenever discussing using this route to people I discuss with so for my own sanity's sake I've already made a post Had 30 April 2005 gone differently, which was a rant to begin with and for the sake of not repeating or making more rants, one word:
Bad.
Better initially than Go-Ahead's not-good-but-not-abysmal 2005-2010 tenure but towards the end of Abellio's tenure, was unbearable.
I've howled on enough in my life about how it's every 15 frequency combined with single door 8.8m vehicles on a route that was double deck catering to more than a million passengers was not a recipe for disaster. See 2002's worst bus route named and shamed (BBC News article).
Common turns: Gipsy Hill (southbound) & Brixton (northbound)
Thinking back, I've rarely had a 322 turned to West Norwood under Beddington Cross (BC). Though the preferable option was, as evident by the above statement, to turn to Gipsy Hill, preferably not resort to curtailments even. As for Clapham North turns, those were alien to me whenever happened. Though under Go-Ahead that would be a normal case given it's proximity to Stockwell (SW) for meal reliefs and what-have-you other reasons. I don't remember experiencing a Tulse Hill turn whilst I have only one instance of a Herne Hill turn.
Running numbers of BC141+ (used to be BC561+ from 2010 to 2012).
Now, for 2015-2022.
Let's start with the first few months, then roll to 2016.
Routes 322 and 432: first months of 2015
I've never been prone to West Norwood turns under Stockwell (SW) than before them, which questions me how I've never experienced such a turn on the 196 yet has become commonplace to me under the 322/432. 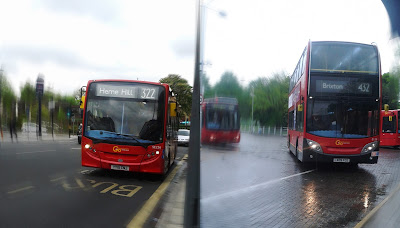 Understandably as they got to grips with the 322, service was in it's baby stages but the increased frequency made up very well for any noticeable faults or cracks, just the curtailments (by this point, Gipsy Hill, Herne Hill, West Norwood) which were more numerous now as a high frequency route than a low frequency route.
Whereby low frequency being up to 2 mins early and 5 minutes late is acceptable, but being to time is imperative.
Whereas high frequency the game is for each bus to be distanced from each other by their frequency. In this case, each 322 to be 12 minutes apart ideally.
The former pretty much consolidates a lone-wolf for every separate bus, whereas the latter means every bus is involved in the operation for better or for worse with the high stakes high reward narrative I could push. Regardless, timetable accuracy is not important with high frequency.
As for route 432, it's obvious operation wouldn't be up to the 12-year honed standard of it's predecessor but they would eventually make it there. With a Crystal Palace turn here and there, but unfortunately to it's users more West Norwood turns from either direction than affable.
Route 322 running numbers SW41+.
Route 432 running numbers SW21+.
2016. 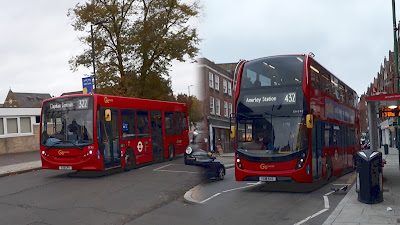 As of March 2022, 322 received a new diversion due to telecommunication works on Atlantic Road due to end on 2 May.
- 322 diverted towards Crystal Palace via Brixton Road, Effra Road and Saltoun Road
- 322 diverted in both directions (0800 to 1800) via route 196, diversion ending 17 May
If you were unlucky enough to ever converse with me regarding 322 you would know I've lamented it's service post-2020 particularly when the Brixton diversion ended.
I look fondly back in 2015 and 2017-2019 when the 322 was a reliable every 12 route with it's only shortcomings being it's vehicle size but alas not a Go-Ahead issue but a TfL mandated one. Whereas with the 432 it's been relatively good (minus the 2016 issue I brought up) and improved with it's frequency increase in 2019.
All in all, the 432 performed well post-2019 whilst the 322 suffered from a plague of it's own insecurities with every timetable change being a different level of salt in the wounds.
Common turns (432): West Norwood and Crystal Palace (southbound) & West Norwood (northbound)
Common turns (322): West Norwood and Gipsy Hill (southbound) & Clapham North (northbound)
In general since 2019 the 322 has seen all curtailments, with Tulse Hill Station briefly being the most common in both directions at some points, whereas Herne Hill has been used many times in order to light run some 322s to Clapham.
The last Go-Ahead 432 was WVL437 at 01:08.
The last Go-Ahead 322 was SE235 at 00:44.
I did say the next post would be focusing on statistics but I've wound up thinking of doing a report analysis on the 322 and 432 from armchair myself. To my credit, I've brought a fair amount of numbers, more than I envisioned stepping into this.
With all that said and done, I hope you enjoyed this unusual foray and look forward to the next post, of which I make no promises what content it could be... not 322-related please.
Until then, stay safe! Enjoy screenshots I've kept for my own reference and here is the spreadsheet link: